Before commencing any programme the client needs to partake in a short postural and lifestyle assessment. This time is used to explore any long term injuries or concerns they may have, look at the influence particular jobs or lifestyles may be having on their posture generally and assess for structural and muscular imbalances or misalignments that may be affecting the individual’s normal day to day functioning.

When this client first came to Corehealth, she was concerned mainly about improving her posture, strengthening her lower back, because of periodic lower back pain, and to ‘flatten’ her stomach.

We worked not only on her core strength, but also focussed on releasing and ‘opening’ the shoulders. After only eight sessions the changes were becoming apparent.

The client started with a hyper (increased) kyphotic curve in her thoracic (upper) spine but also note the whole ribcage is thrown forward resulting in the head straining forward creating yet more tension in the neck. 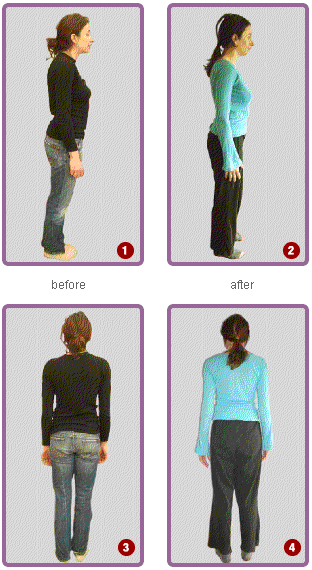 After the sessions, you will notice how the head sits in a much more comfortable position putting less strain on the back of the neck. The ribcage is more relaxed and softened and the thoracic curve less prominent.

It is also noticeable in

how the pelvis is tilted forward (hyper lordosis) resulting in the upper body swaying back in order to keep balance.

(after) the pelvis has started to reposition to bring the body into a much more upright and lengthened posture.

the right shoulder is raised and internally rotated

shows how much more even her shoulders look, holding far less tension than before.