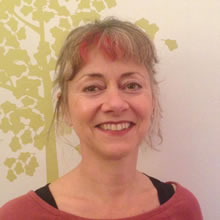 Lorraine began her working life as an actress, until a collision with a car on a pedestrian crossing in 1991 completely changed her direction.
After several months of physiotherapy, she decided that health and fitness was the way forward and qualified as an Exercise to Music instructor in 1993 with the YMCA. After many years of teaching a variety of classes, her thirst for knowledge led to her gaining a Masters Degree in Exercise & Health Behaviour at City University.

She then began Personal Training, specialising in Weight Management, but still felt there was more to explore. It was after the birth of her son Toby in 2000 that her real interest in Pilates began to flourish and she soon realised that she wanted to devote her time to this technique above other kinds of exercise.

Lorraine now teaches Pilates classes of different levels at the studio, from Beginners to Intermediate, Advanced as well as Senior Pilates classes . She also spends much of her day teaching one to one, which can be more specific to the individual’s needs and therefore offers quicker improvements. She feels the Pilates method is an ongoing discovery of the human body and the way it works and is constantly amazed at how effective the most simple of exercises can be.

I had been doing studio Pilates for 2 years when I was lucky enough to attend a series of mat classes taught by Lorraine. I had already seen amazing changes to my posture, and an end to the back and neck problems I faced.

I have really enjoyed being taught by Lorraine who combines humour, knowledge, positivity and a gentle touch of sadism. I’ve also learnt lots more about using and stretching my body, my abs especially have become much stronger, and I’ve seen my body elongate and tone. I’m now completely addicted to Pilates, I attend Lorraine’s classes twice a week, and I’d do more still if I had the time!
Christine Asbury

After attending a couple of classes on a drop in basis, I committed to a full pilates course with Lorraine especially because, even though it’s a ‘large group class’, Lorraine has the capacity to make it feel tailor made for all the varied individuals who attend. And boy do you feel good afterwards!
S R

I have been attending Pilates classes with Lorraine for some years now and have found many benefits arising from these sessions; greater flexibility, a stronger back and much better stomach muscles which obviously help the appearance and the back.
They are refreshing to attend and it is good to be able to work at
your own pace in a non competitive environment!
Natalie S.

I greatly value Lorraine’s teaching and the practise of Pilates. It is so good for me and so satisfying at the same time !
Pauline Jones

I have MS and Pilates has helped me a lot. Lorraine was great to have as a one to one teacher as well as in a class and when back in London I will most definitely be taking it up again.
Lynne H – Daventry

I have a scoliosis which, although not severe, gave me regular back pain and made me look quite lop-sided. I had thought that there was nothing much more I could do about it, but my 1-2-1 Pilates sessions with Lorraine completely changed everything. It made such a difference to have sessions tailored to my particular needs, and in a matter of weeks I could see real changes. It really helped to have the personal attention that a 1-2-1 session gives you, to make sure I was doing the exercises correctly and getting the most out of them. The great improvements that I have made, together with Lorraine’s really positive approach, have meant that I have also since felt much more positive about my back condition; although it will be something that I will always have, I am now in control of it rather than it being in control of me. I would have a 1-2-1 session every day if I could!
Liz

I joined Lorraine’s first Sunday Pilates class at the Hornsey Vale Community Centre (2002) very tentatively, being one of those people who never sets foot in a gym, but I’ve continued to attend ever since. Lorraine knows her stuff but delivers it in a completely non-threatening way. She’s very goodat making you aware of what’s going on and how it should feel (often along the lines of ‘if this exercise is easy, you’re probably doing it wrong’).
She takes you through at a gentle pace that gives you time to feel the connections, encouraging everyone to work up to their own level. Her class is now a mixed bag of relatively experienced people and complete newcomers. One of the nice things is that it’s quite possible to start in the middle of a course and if you want to have a single session as a taster, that’s just fine.
Kate